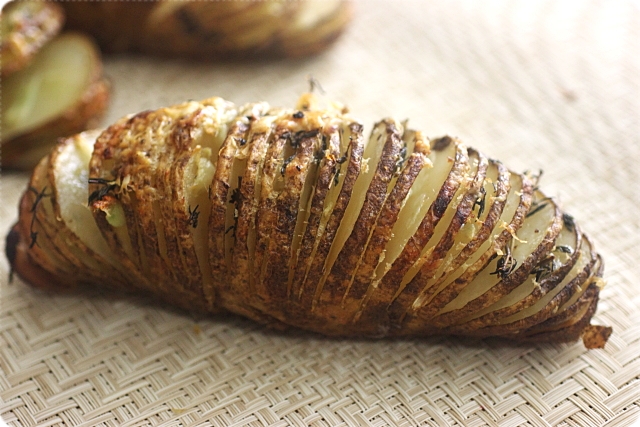 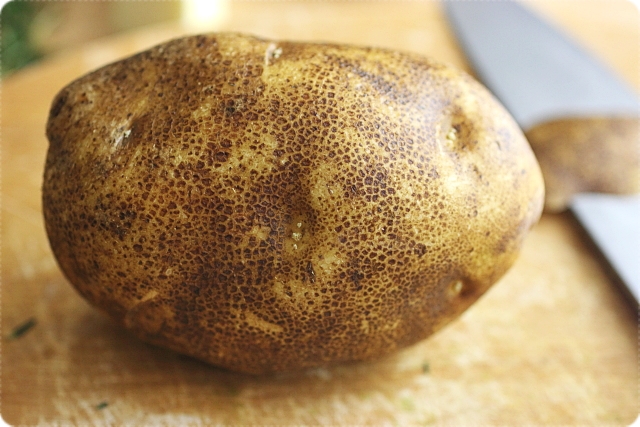 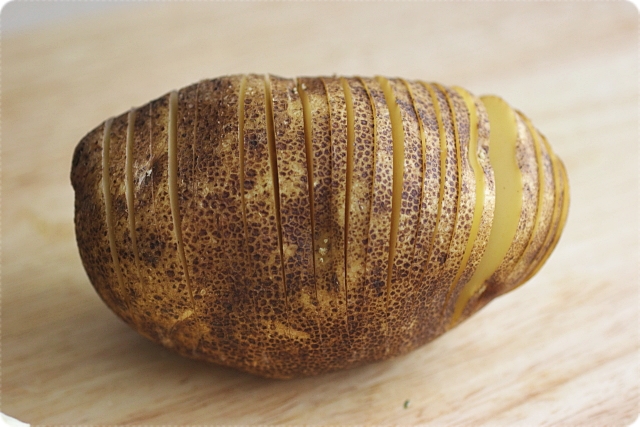 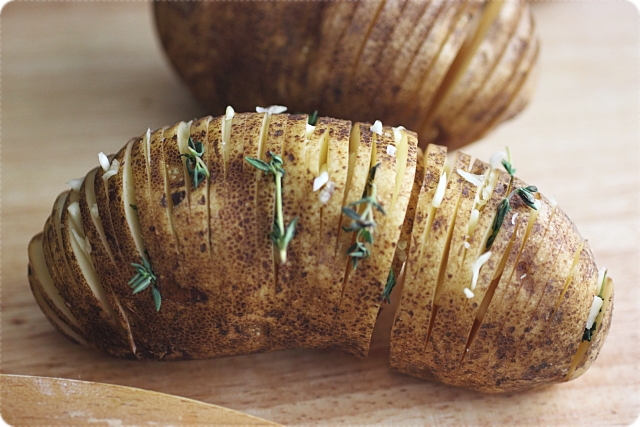 That’s what Hasselback potatoes are. It’s an everyday overlooked potato picked up, wiped down, dressed up, hair did, eyelashes curled, pumps on and totally flippin’ new again.

It’s a potato with a Jenny Jones make-over.

You want to think of David Hasselhoff when I mention these potatoes. You have to fight that. Hasselback potatoes don’t wear leather jackets and roll in a talking car named KITT. 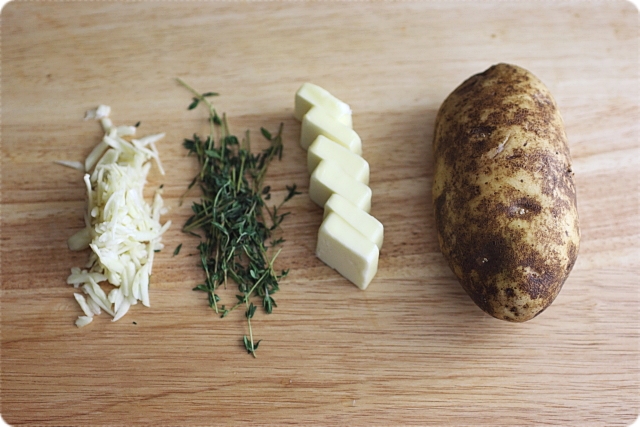 Quick, who does the voice of KITT?

Great, now the Knight Rider theme song is in my head. It will be there all day. My brain can’t help it.

Is it in your head too? We can’t fight that. The theme song rocked.

Ok, let’s get it out of our system.

Go on, play it… You know you want to. Leather jackets and talking cars are totally in right now…

Hasselback potatoes have absolutely nothing to do with The Hoff. Let’s make that clear. I just wanted you to play the theme song. I ain’t ashamed to say it.

Hasselbacks are how the *Swedes do up their ‘taters. Who knew the *Swedes knew a thing or two about kicking up a root vegetable? 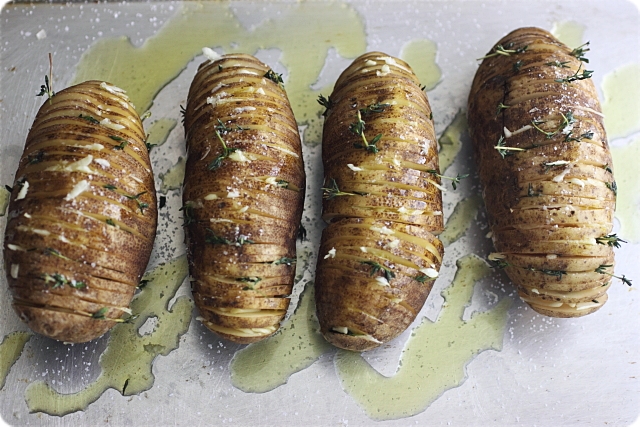 I grated like 10 garlic cloves for 4 potatoes. That was some serious, serious garlic breath. I added thyme sprigs. I sprinkled kosher salt and olive oil on them. Then I poured melted butter over those babies…

And if that wasn’t enough, I got my microplane and grated some parmesan cheese over em’. 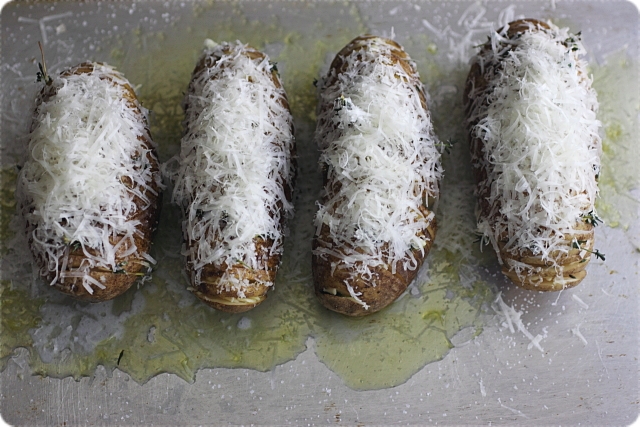 When baked the cheese melts and leaves a nice crunchy cheesy coat. The garlic almost melts into the potato slices and the thyme lends some nice herbal notes.

Did I mention I poured melted butter over these potatoes?

Did I mention I basted these babies in olive oil? 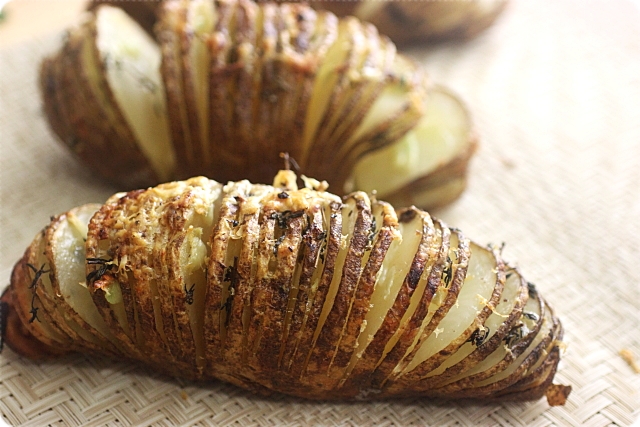 You gotta jump on this bandwagon, or on KITT, or…

It doesn’t even matter.

Hasselbacks are where it’s at.

Get your Hasselback on…

* In my original post, I totally said the Swiss came up with these potatoes. Wrong! I was schooled by Catharina, who is Swedish, and nice enough to leave a comment on my blog. 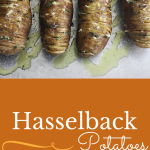 Adapted From Joy The Baker
Servings: 4 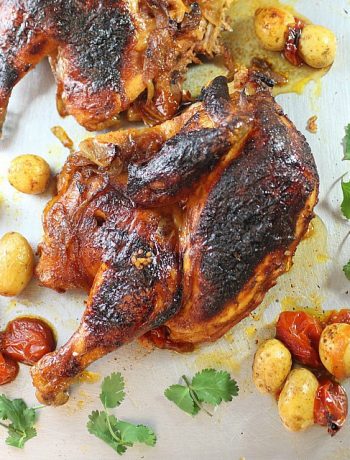 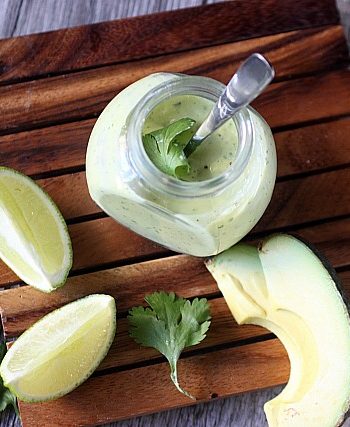